Protestantism and Economic Growth in China


Does culture, and in particular religion, exert an independent causal effect on long-term economic growth, or do culture and religion merely reflect the latter? We explore this issue by studying the case of Protestantism in China during the late nineteenth and early twentieth centuries. Combining county-level data on Protestant presence in 1920 and socioeconomic indicators in 2000, we find that the spread of Protestantism has generated significant positive effects in long-term economic growth, educational development, and health care outcomes. To better understand whether the relationship is causal, we exploit the fact that missionaries purposefully undertook disaster relief work to gain the trust of the local people. Thus, we use the frequency of historical disasters as an instrument for Protestant distribution. Our IV results confirm and enhance our OLS results. When we further investigate the transmission channels over the long historical period between 1920 and 2000, we find that although improvements in education and health care outcomes account for a sizable portion of the total effects of missionaries’ past activities on today’s economic outcomes, Protestant activities may have also contributed to long-term economic growth through other channels, such as through transformed social values. If so, then a significant amount of China’s growth since 1978 is the result not just of sudden institutional changes but of human capital and social values acquired over a longer historical period.

There are interesting graphs at the end. This is one of them: 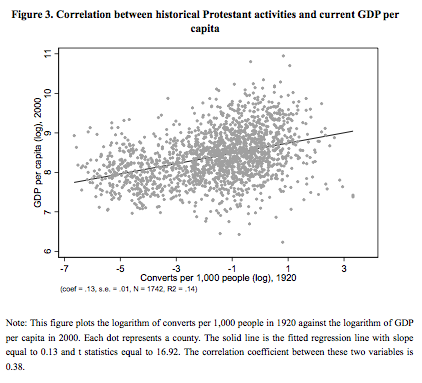 And the authors are from the School of Management at Peking University.

Email ThisBlogThis!Share to TwitterShare to FacebookShare to Pinterest
Labels: China, economics of religion